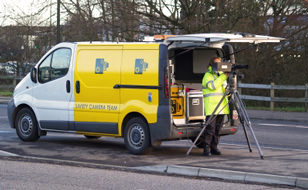 To mark the start of the New Year, the government have announced the roll out of hundreds of new mobile speed camera vans across the country in an attempt to further reduce fatalities on our roads.

The cameras first came into affect in 2010 and were fully operational by November 2011. Since their introduction we have seen a large decline in serious accidents and deaths on the road for drivers and pedestrians. In fact, 2012 saw the lowest number of fatal collisions, as well as a 40% drop in pedestrian related accidents.

The cameras are operated by a private company called GoSafe and will be located in new areas deemed to be accident black spots based on five years worth of data. The new cameras won't come without warning though, as local authorities will display signage advising drivers of the cameras.

In the UK, the government mainly uses static cameras which motorists know about as they are clearly visible, but can often lead to complacency as motorists speed up between camera locations. In Ireland, the government has opted for the mobile camera vans in set zones and locations which can be moved around at any given time. This is not to catch the driver out; it is to encourage drivers to slow down no matter where they are.

We're really supportive of the initiative to roll out more cameras as not only is it proven to help save lives, which is the priority here, but it means drivers will become more careful and reduce the risk of penalty points.

If you get caught speeding, it's an automatic €80 fine and two penalty points, which could mean higher insurance premiums and therefore more money to be paid out each month. Don't forget that 12 points will lose you your licence for 6 months, and when you are eligible to get back on the road, you may find your insurance premium higher again due to your disqualification. This is not a situation we want any of our customers to be in as we like to help careful drivers get low cost car insurance.

Many will see speed cameras as yet another way for the government to get more money out of us. However all the money generated by the cameras goes directly to the Exchequer as GoSafe are paid a flat fee to operate the systems.

The Gardaí will publish the new locations of the vans in the coming weeks on www.garda.ie as they are transparent about their locations. The aim is not to give you penalty points and fines which if left unpaid will give you an appearance in a district court and waste valuable time, money, and resources. The aim of the game is to slow drivers down and keep everyone safe.