Ireland On Camera: Film And TV Map Of Ireland 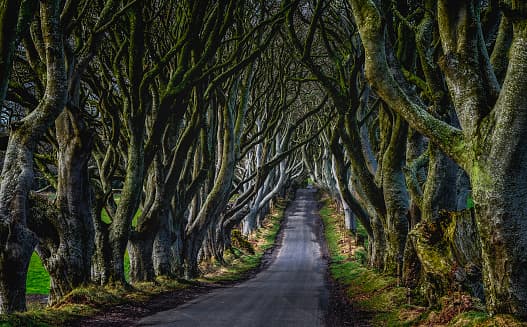 Ireland is a country rich in history, art and culture - but did you know it has also served as the backdrop to some of the most popular films and TV shows? In fact, there’s a good chance you’ve seen at least one of these masterpieces on either the small or silver screen without even realising its connection to Ireland.

At Chill, we’ve created a map of Ireland, pinpointing where some of your favourite flicks and programmes have been filmed.

So, let’s delve in and take a closer look at which well-known cinematic and TV-based creations owe it to Ireland.

First up is Northern Ireland, which can’t be mentioned without a nod to Game of Thrones. Filming for the fantasy drama took place throughout the country, and many of the show’s iconic Winterfell scenes were shot at Castle Ward - an 18-century property near the village of Strangford, County Down.

If you’re a fan of BBC police drama Line of Duty, you may have clocked that various scenes throughout the show’s five seasons were shot in Northern Ireland too. The Obel Tower at Donegall Quay, which dominates the Belfast skyline, can often be seen during episodes.

As for blockbusters, filming for Transformers: The Last Knight took place further north. For the fifth installment in the Transformers franchise, the cast and crew headed to Ballymoney, County Antrim to capture scenes for the action-packed movie.

Dublin has posed as the backdrop in many films over the years - including The Italian Job, starring British actor Michael Caine. The 1969 heist film shot its opening prison scene at Kilmainham Gaol. Take a closer look next time and you’ll notice the English prison guard is in fact the great late Frank Kelly. The county has also featured heavily in popular flicks such as P.S. I Love You, Love, Rosie and Bridget Jones’s Baby. Romance drama Once is set within Dublin city centre, and filming for the movie’s many music shop scenes took place in Waltons on George’s Street.

Dublin has been the setting for a number of popular TV programmes too. Scenes for the fantasy mini-series Neverland were filmed in Swords, while historical TV show The Tudors used Drimnagh Castle to bring its story to life.

The east of Ireland has provided the background for many award-winning movies - including Saving Private Ryan. Since the story is set during the invasion of Normandy in World War II, director Steven Spielberg wanted to create an almost exact replica of the Omaha Beach landscape. Upon finding Ballinesker Beach in County Wexford, the director decided to shoot the movie’s spectacular D-Day sequences on this picturesque stretch of coastline.

Other cinematic creations set in eastern Ireland include Ella Enchanted starring Anne Hathaway, which was primarily filmed in Humewood Castle in Kiltegan, County Wicklow, as well as Mel Gibson’s Braveheart, which includes several outdoor scenes shot less than an hour away in the same county.

When it comes to the small screen, TV shows shot in east include favourites such as Camelot, Ballykissangel and Little Women.

As we head over to the west and south west of Ireland, you may be surprised to find out which blockbusters had scenes filmed here. The Cliffs of Moher in County Clare were used in movies such as Harry Potter and the Half-Blood Prince, The Princess Bride and Snow White and the Huntsman, while Skellig Michael, was used for filming in two of the most recent Star Wars movies - The Force Awakens and The Last Jedi.

While Father Ted is set on the fictional Craggy Island, most of the filming for the hit TV show took place in Cloon, County Clare, as well as the nearby market town of Ennistymon.

Whether you’re a self-confessed movie fanatic or you love to binge-watch box sets, check out our map to find which films and shows can thank Ireland for helping them take the story from script to screen.