Watch Out For That Pothole

On the Open Road 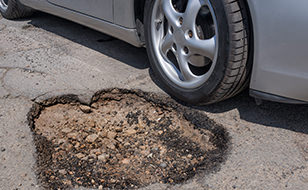 Have you had a run-in with a pothole on one of Ireland's roads? Although, precise figures are hard to come by, the recent high profile campaign by the Irish Mirror, as well as notable articles in the Journal and the launch of Potholes.ie have helped make potholes a major talking point. In fact, we'd go as far to say that potholes are fast becoming the scourge of motorists the length and breadth of the country.

But potholes aren't just a nuisance, they're a very real danger for road users! They can cause damage to car suspension, the rims of your wheels, tyres, steering alignments and shock absorbers. In addition, they often cause drivers to swerve, which isn't good for the vehicle, oncoming traffic or cyclists.

What can you do to avoid a pesky pothole damaging your car? The best advice it seems is to have a good quality set of tyres. We'd also recommend that you slow down when you see a pothole approaching and be extra careful when you drive over or through it.

For those that like to think outside the box, who can forget Liam Keane from Cork? To draw attention to a rather large pothole that was filled with water, Liam donned his swimming trunks and took a dip! It didn't take long for the video to do the rounds on social media, culminating in a raft of TV appearances and newspaper interviews. In all fairness, Liam's antics also caught the attention of someone at Cork County Council and the pothole was repaired just days later.

With many councils cutting their budgets for maintenance work and basic repairs, unfortunately it seems we can expect to see potholes on our roads for a little while longer. As always, the best way to protect your vehicle and provide peace of mind is by taking out car insurance. If you'd like to find out more, give one of our friendly team a call on 01 4003400 or hit Get a Quote now.