Smile! Your On Camera 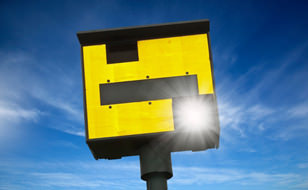 To most of us, speed cameras are a real pain, but the reality is that they are implemented to save lives and reduce road traffic accidents.

In 2010, a network of privately operated and Garda operated mobile speed camera vans were launched. These vans are part of an on going campaign by the Gardaí and the government to reduce the speed of motorists in accident black spots and help towards reducing speed related accidents.

In Ireland, the number of fatal collision on the roads has long been a documented issue and the speed camera roll out was a significant step towards reducing these fatalities. In 2010 the number of deaths on the road fell to 212 which were the lowest on record. This suggests that the speed cameras and new safety measurers being implemented on our roads are having a positive affect.

The speed camera vans are specifically located in accident black spots where fatal road collisions have been high and areas where speeding has been an issue. The vans operate covertly and are in different makes and models displaying a safety message. The units are in operation 24 hours a day, 7 days a week and despite the fact that we feel that they are hiding in the bushes waiting to catch us, they are positioned blatantly on the side of the road, forcing us to slow down.

The Garda vans are operated by GoSafe, an independent organisation on behalf of the Gardaí. If you are caught by a mobile speed camera van, you will receive notification in the post along with an €80 fine and two penalty points. Failure to pay this fine within 28 days will see it increase to €120 and failure to pay this after this period will land you in your district court, four penalty points and up to an €800 fine!

The Gardaí have been very candid about the camera's and have a detailed map online of their exact locations. With so many vans now in operation, chances are you will encounter one on your commute to and from work.

The government has been adamant that these new speed cameras are to save life, not to generate revenue. So far, they seem to be working as deaths on Irish roads have slowly begun to drop. The important issue here to tackle driver attitudes and The Gardaí have also begun a roll out of safety messages along major roads and motorways across the country. The message is to arrive alive and not to sacrifice safety over time.

If you see a mobile speed camera van and fear that you are over the speed limit, chances are you have already been caught on camera, as they can read your number plate quicker than you can blink. So slamming on the breaks is not going to rectify the situation, but only increase the risk of the car behind you rear ending you. If this happens, you are then potentially faced with an insurance claim.

Speed limits are enforced on all roads for a reason, and that is to ensure all vehicles using the road are travelling at a safe speed. Remember, these are limits, NOT TARGETS! Keep your distance from the car in front and never forget that only a fool breaks the two second rule. The difference of two seconds could mean the difference between a rear end collision and a breaking to a safe stop.