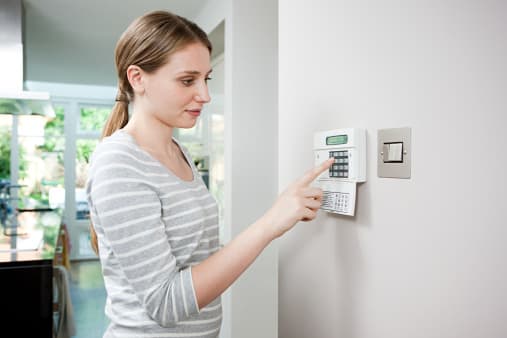 For many people, getting on the property ladder is considered to be an important achievement in life, and as it takes a lot of saving up, waiting, stress and often luck to find and eventually move into your dream home, it can be a relief to finally seal the deal on the property you wanted. However, one of the concerns that comes with owning your own home is keeping it safe and secure.

However, there are steps you can take to make your home more secure. As well as helping you to avoid break-ins, these measures could prevent any increases in your home insurance premiums caused by you having to claim as a result of a burglary.

It is often noted that a lot of burglaries are carried by the intruder entering through a back door or window of the house. Burglar alarms are available in a number of forms and are capable of deterring burglars that attempt to come in through any of the house’s windows or doors.

Although having a burglar alarm fitted can be expensive, these devices are recognised as an effective deterrent to intruders. Even the mere sight of an alarm being present can be enough to put burglars off.

The benefits to having a burglar alarm include:

Extensive Protection -
Depending on the type of coverage you get, you can also include smoke and carbon monoxide alarms as part of your security system.

Immediate Support -
An alarm that makes a lot of noise is likely to frighten off a burglar, but a monitored security system will send an alert to a dedicated response centre. If the alarm isn’t deactivated, the response centre will send someone to come to check on the house straight away.

Constant Maintenance -
High-end burglar alarms are monitored to check that they’re working as they should be, and many of the faults can be fixed remotely.

Personal Preference --
If you’re concerned that a false alarm will lead to an unnecessary response from your security system provider, you can opt for a handful of close friends, family or neighbours as keyholders to deactivate your alarm instead, preventing unnecessary bother.

For a cheaper alternative to burglar alarms, a light timer is a simple solution that can dupe potential intruders into thinking you’re home even if you’re not.

How To Use A Light Timer

In the past, home security cameras tended to rely on CCTV cameras and systems, but there are now far more options available, including cameras that seamlessly hide in your front door’s peephole.

Can You Put Cameras Outside Your House?

If your cameras were pointed toward a publicly accessible space and could be recording individuals in that area, it would be in breach of the EU’s laws on data protection.

Whether it’s through putting up a CCTV camera that isn’t actually in operation or installing a motion detector light, there are a number of ways to scare burglars off from entering your home.

You’ll find a selection of different signs in any DIY shop, but is it worth buying a sign that suggests you have a dog just in case it could frighten off someone considering breaking into your home?

There is no definitive proof that suggests owning and displaying a ‘Beware of Dog’ sign or similar notice will deter a burglar from attempting to enter your home. However, it has been recommended by a number of home security and insurance bloggers as a cheap and easy way of scaring off potential intruders.

Strengthening Your Property’s Windows And Doors

It may seem simple, but ensuring that your windows and doors are suitably strong could be the difference between your house being secure or making it easy for an intruder to find their way in.

It’s advisable to have a deadbolt on your front door - and back door if possible - as this is often recommended by insurance companies. Also sometimes known as a deadlock, a deadbolt works by locking into the doorframe on five different levels to provide more security than a traditional lock with just one level. They’re regarded as being highly effective at preventing break-ins, and due to the strength of the mechanism and the number of moving parts, they’re difficult to tamper with.

How To Secure Your Windows

Securing doors almost goes without saying, but how do you know that your windows are suitably secure? A report from alarm company PhoneWatch revealed that, on average, a break-in occurs every 31 minutes in Ireland, with a large percentage being carried out through windows. PhoneWatch recommend to lock doors and windows securely.

Changing your windows to newer versions with built-in locks is something you should consider. Fortunately, there are a number of options available. These include:

Additionally, there are other security measures you could put in place to ensure the safety of your home. Even simple things such as putting extra focus on checking that you’re locking the door properly when leaving, situating potentially desirable items away from windows and locking expensive items away in case a burglar does manage to enter your home may help to put your mind at ease.

HOW TO SECURE YOUR HOME WHILE YOU’RE AWAY

Things you could consider doing to increase your home’s security while you’re away include:

One of the easiest ways to help ensure that your home is safe is to ask a trusted friend to check up on it on a regular basis. Or, if you’re lucky enough to have a neighbour that you can rely on for this, ask them. This is preferable as they’ll be closer to your home to monitor it.

In the modern age, it’s common to announce your upcoming trip on various social media platforms and continue to post regular updates. However, if someone is planning to break into your home, they may be monitoring your social media accounts, so an openly advertised holiday provides the perfect opportunity for them. If you want to continue to use social media, you can as long as you can publish posts using a setting that limits the people who see them to close friends and family.

You can put as many useful deterrents in place as you want, but if someone breaks into your home, you need to make sure that you have the correct level of home insurance cover for anything they might take. To check that you’re sufficiently covered against theft and any types of damage that could occur in your absence, look in detail at your current cover and consider changing it if it’s not suitable.

Switch Off Any Unnecessary Electricals

Another part of safety is checking that your home isn’t likely to be damaged during your holiday, for example by fire or flooding. To this end, turn off appliances such as your washing machine, dishwasher and any electrical entertainment devices, including TVs, DVD players, computers and games consoles.

HOW TO MAKE IT LOOK LIKE SOMEONE IS AT HOME

One method of putting potential burglars off attempting to break into your home is by making it seem like someone is still there. Although your car may be missing if you’ve used it for your trip, you could make it look like a family member or friend is staying at the house while you’re away.

Keep Giveaways To A Minimum

Burglars may be looking for telltale signs that a house is vacant such as the bins being left on the driveway after bin day, the grass being noticeably long, the milkman leaving cartons of milk outside your door that aren’t being taken inside, post stacking up behind your front door or your driveway being empty.

If you’ve already arranged for a friend, family member or neighbour to check on your house, why not ask them to make it look like someone is still there? All they need to do is move bins away after bin day, maybe open the blinds or curtains if they’re checking on your house daily and move post away from the front door.

You can help with this yourself by looking at ways to make your home look lived in before you go away. For example, this could include cancelling milk deliveries for the duration of your trip and, if possible, leaving your car outside and getting a taxi or lift to the airport.

Leave A Number Of Lights On

Lighting in your home may be a giveaway as to whether or not someone’s in. For example, if there aren’t any lights on in the early evening, it’s highly unlikely that you’re sitting in the dark. If a light in your home is usually left on, you could choose to leave it on while you’re away, but a light left on throughout the night may appear strange.

WHAT TIMES DO MOST BURGLARIES OCCUR?

When most of us think of an average burglar, we think of a person in dark clothing breaking into our home in the dead of night - either when we are fast asleep or away from the house for the evening. However, on the whole, this is not an accurate image.

Do Burglars Break In At Night?

Break-ins can happen at any time day or night. Most burglaries occur between 4pm and 9pm especially during the winter months. This is a time period where houses can often be empty as the owners may be commuting and darkness has already fallen.

Naturally, burglars do not want to risk being caught and therefore tend to attempt break-ins when they believe the occupants of a property are out at work or doing the school run. Some potential burglars may also wander around a neighborhood during the day looking for break-in opportunities, when they could be confused for workmen or just regular people going about their daily business.

It is important to remember that most burglaries are crimes of opportunity and can happen at any time of the day, particularly if you have not taken the necessary precautions to protect your property. If you follow our advice laid out above, you should be able to take all the precautions possible to make sure you’re never a victim of a burglary.