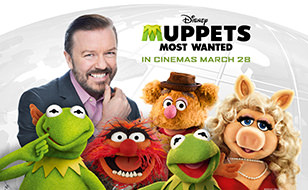 We've great news for our customers, Chill Insurance have teamed up with Disney Movies Ireland to give you the chance to win tickets to see one of this years must see movies, Muppets Most wanted.

The movie is a follow up to the Oscar winning The Muppets and it goes on general release in Ireland on March 28th 2014. Disney's Muppets Most Wanted takes the entire Muppets gang on a global tour, selling out grand theatres in some of Europe’s most exciting destinations, including Berlin, Madrid and London. But mayhem follows the Muppets overseas, as they find themselves unwittingly entangled in an international crime caper headed by Constantine—the World’s Number One Criminal and a dead ringer for Kermit—and his dastardly sidekick Dominic Number Two Badguy.

The sequel ups the ante on celebrity cameos with the likes of Lady Gaga, Zack Galifianakis, Tom Hiddleston and Christoph Waltz joining main stars Ricky Gervais, Ty Burrell and Tina Fey. No doubt, all these actors will be upstaged by the real stars, the Muppets themselves. With Kermit, Ms Piggy, Animal, The Swedish Chef all on board for the movie it is bound to be a great day out for all the family.

We have four sets of family tickets (2 adults and 2 children) to give away for screenings on March 23rd in the following locations:

Terms and conditions do apply* so please read before entering.

A webform by Podio - click here to get yours

The competition closes on the 20th of March 2014 and we will be announcing the winners on our Facebook page on Friday the 21st of March 2014. Don't forget to like us on Facebook, follow us on @chill_insurance and check out our Google+ page to keep up to date with all the latest blogs and news from Chill insurance.