The Importance Of Smoke Alarms New homes built today have strict regulations that require mains powered interconnected smoke detectors to be fitted. Information from the Department of the Environment, Housing and Local Governmet in relation to fire related fatalaties between 2010-2019 across Ireland found that nearly 40 percent of those who died were in homes which did not have a smoke alarm. This truly shows how important smoke alarms are and that it is vital you have enough in your home and that they’re working properly. Below, we reveal more about why a working smoke alarm is important, how many you should have and where they should be located.

Why do you need a working smoke alarm?

Did you know that in a house fire, the main cause of injury is smoke inhalation rather than burns? It’s also a fact that most fire fatalities happen at night. This is because your sense of smell doesn’t work when you’re asleep and the fumes can actually put you into a deeper state of unconsciousness. This can be very dangerous and highlights why it’s so important to have a working smoke alarm.

How to replace a smoke alarm battery

You should test your smoke alarms at least once a week to ensure that everything is in order. You can usually your alarm by pressing the ‘Test’ button located on the face of the alarm. When the batteries begin to run low, your alarm will likely beep every few minutes to alert you. Ideally, you should never let the batteries run this low and they should be replaced immediately when you hear this warning beep. Otherwise, try to change them once a year to ensure the alarm is always effective. You may get into difficulty putting through a claim for fire damage if it was found that your smoke alarm was not working.

Replacing the batteries is usually quite an easy job. The face of the detector can either be removed by turning it anticlockwise or by pressing two small levers either side of the alarm to release it, as in the image below. Sometimes, it may not be obvious where the battery is. This is because it can be in a separate compartment within the detector, as shown in the image below. 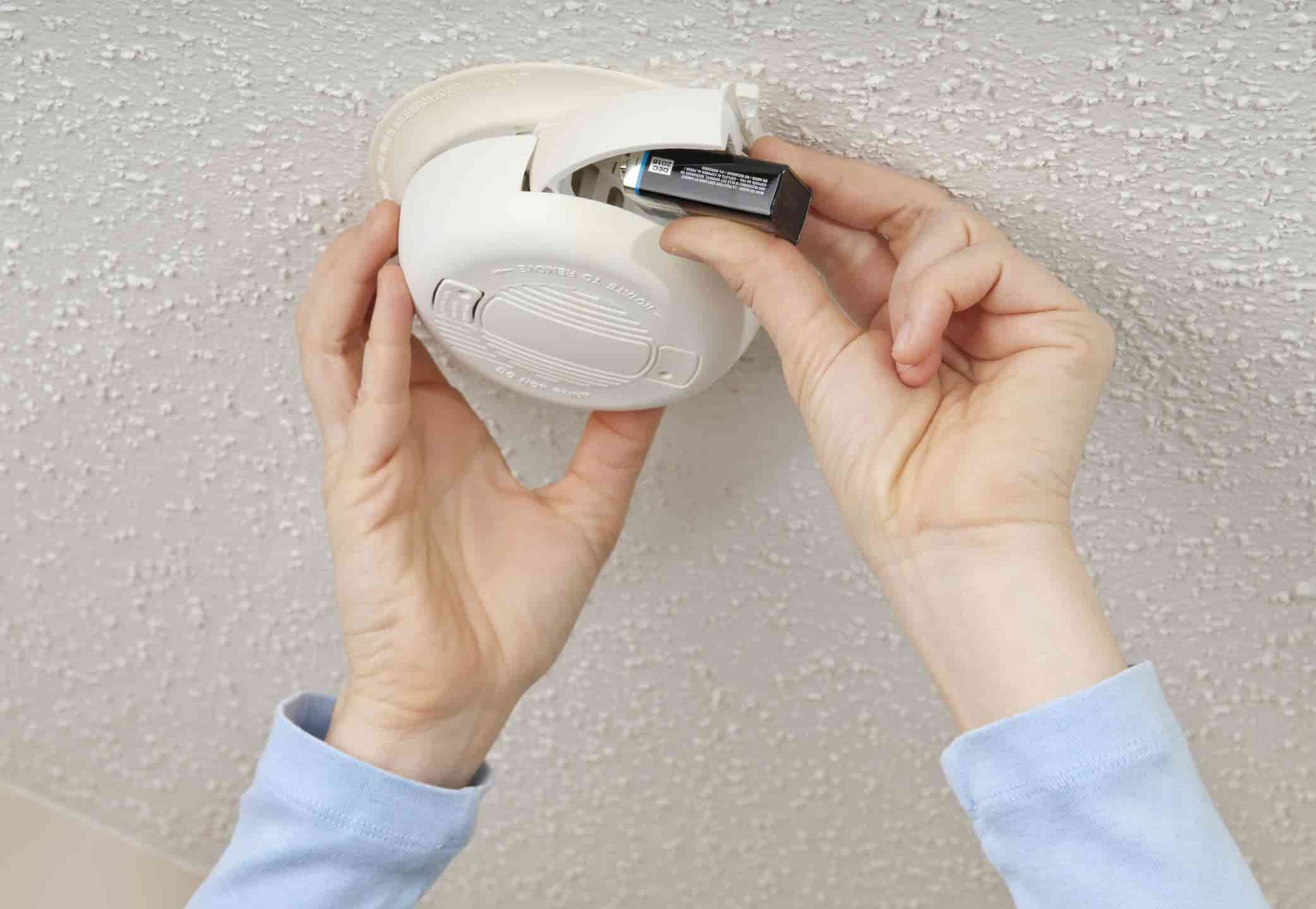 Once you’ve located the battery, you can simply detach it and reattach a brand new battery. Replace the unit by clicking it into place or turning it clockwise and test the alarm to ensure that the new battery is working.

Smoke detectors often have an expiry date of 10 years, and so the whole unit will need to be replaced after this time . You should check the alarm to see when your alarm expires (usually stamped on the alarm or written on a label inside the unit) and replace it as soon as possible.

How many smoke alarms do I need?

Any smoke alarms in the property should carrty a CE mark. These alarms will have been rigorously tested and will be the best at detecting a problem.

Where do smoke alarms need to be placed?

As mentioned above, at least one alarm should be placed at on each floor and in central locations. But ideally, you should have an alarm in every room except those that are subject to a lot of steam, such as kitchens and bathrooms. Instead, for these areas, you may choose to have a heat detector.

When it comes to finding a suitable position for the alarm, think about where smoke will be detected first. In a bedroom, for instance, the smoke might come in through your bedroom door, making this a good location. You might want to avoid either placing the alarm too far into a room, as it would take a while for the alarm to detect the fumes, or by a window, as the smoke could escape, leaving it unobserved for longer.

Do smoke alarms have to be on the ceiling?

Generally, the ceiling is the best place for a smoke alarm. This is because smoke rises and so it may be detected more quickly. However, if you do decide to install a smoke detector on a wall, it must be relatively high up on the wall, around six to 12 inches below the ceiling level.