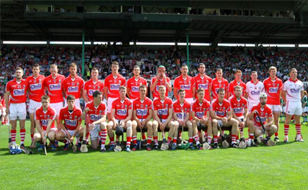 We already know that Kilkenny are one of the finalists for the 2014 all Ireland hurling final and this weekend we will find out who will be joining them as Cork face Tipperary in Croke Park.

Both teams remain unchanged from their last outings as Jimmy Barry Murphy and Eamon O’Shea hedge their bets on the same 15 who have gotten them this far. Munster’s last two teams left in the championship have a lot to live up to after Kilkenny and Limerick provided a feast of high drama and intensity in the first All Ireland semi final outing.

Video: How do both managers feel ahead of today? We spoke with @OfficialCorkGAA's JBM & @TipperaryGAA's Eamon O'Shea http://t.co/eR5rDQHPx0

The introduction of the qualifier system has brought this classic Munster rivalry to the general public outside of hurling’s southern stronghold. Having met 82 times already throughout the years, both teams had 37 wins, this match has the potential to another classic encounter.

Cork have had a very successful 2014 thus far as they achieved promotion for division 1B and won the 2014 Munster hurling title. Tipperary have also had a successful 2014 as they reached the division 1 league final, where they were just pipped at the final hurdle by Kilkenny, and came through the qualifiers to set up this match.

The last competitive encounter between the two teams featured seven goals but, with both teams tightening up their defences since, we shouldn’t expect to see as many green flags getting raised but then again you never know.

Both teams have shown great determination and no little skill in getting this far with Tipperary defeating the likes of Offaly, Dublin and Galway on their way to this match. Cork on the other hand overcame a tough proposition in the Munster final in Limerick, who ran Kilkenny incredibly close, but have had a five week lay off since. Cork’s capacity to feed off scraps at certain times during the Munster final, as well as their impressive physical conditioning, should make them a lethal proposition for a Tipperary team who have lost key defender Michael Cahill, due to injury, from the starting line-up.

As mentioned already both teams remain unchanged since their last match meaning that Cork captain Patrick Cronin, who has being given the all clear after coming off early in the Munster final defeat of Clare, continues at full forward alongside other potential match winners in Alan Cadogan and Patrick Horgan. A lot has been made of the potential impact the likes of Aidan Walsh, Daniel Kearney, Mark Ellis and Damien Cahalane will have on the outcome on Sunday but the modern game is now more about your panel and not just your starting 15.

Cork faces a very strong Tipperary outfit featuring the likes of Brendan Maher, Noel McGrath, Lar Corbett, Shane McGrath and Darren Gleeson. Tipperary, like Cork, has a very strong bench which makes this match an intriguing encounter for those who will be tuning in at 330 on Sunday. The joy of the All Ireland championship is that any team can win it and this match could be decided by a great individual performance from either team.

Everyone here in Chill HQ, especially our Cork office, will be glued to the TV on Sunday to cheer on the rebels as they attempt to overcome a very impressive Tipperary team. Make sure you get behind the Rebels by showing your support across Twitter, Facebook and Instagram using #onecountyoneteam and #CorkGAA14.